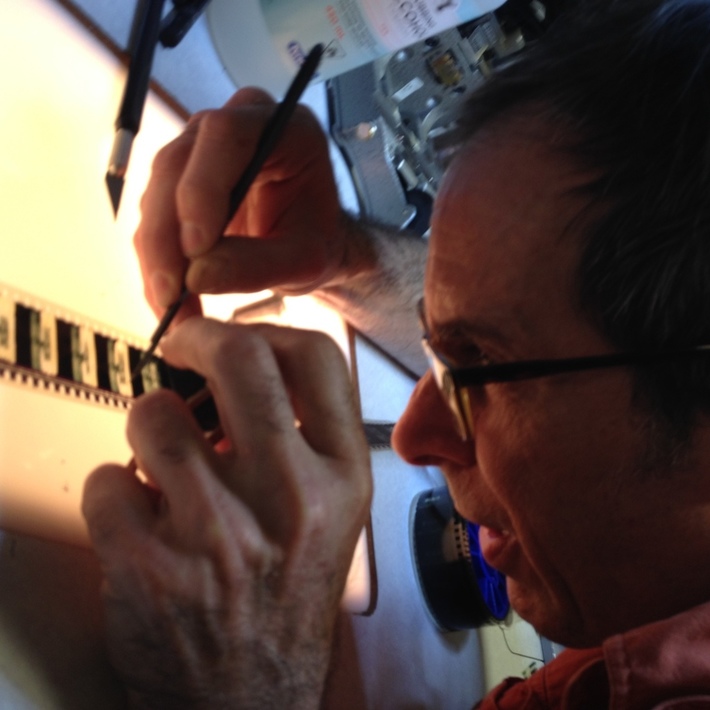 EXPLORE FILM!Plunge into the visceral, energetic world of handmade filmmaking with this unique, easy-to-read…Continue

Steven Woloshen has not received any gifts yet

The films of Montréal-based filmmaker Steven Woloshen remind us what a pure pleasure animation can be, while at the same time opening the field up to ideas and methods that remain unexplored in most animation. Woloshen first made his presence known with a series of promising short 16mm films in the early 1980s. These introduced the fundamental techniques and stylistic traits that he would explore in later work: abstract “direct” or “cameraless” animation; a close parallel relationship between source music and image; the combination of abstract graphics with linguistic signs; the visual contrast of hard-edged shapes against more organic curvilinear forms; extremely brief visual phrases leading into longer, more stable ones; and intense splashes of color set against neutral black or white lines and shapes. (“Direct” or cameraless” animation, the field out of which Woloshen’s entire practice grows, encompasses an open-ended set of techniques in which an artist works directly on the film strip, adding to it with inks, paints or dyes, adhesive tapes or transparent objects, or etching into the emulsion with sharp implements.)
Following a hiatus of more than a decade, during which he worked in various capacities in the film industry, on-set and in the laboratory, Woloshen returned to his own filmmaking in the late 1990s. It’s clear that his years working in the commercial industry were far from wasted: Woloshen’s films “post-hiatus” are extraordinarily assured, showing enormous progress in aesthetics, graphic technique and understanding of lab processes. In a series of extraordinarily accomplished 35mm Cinemascope films that quickly became worldwide festival favorites – including Get Happy (1999), Ditty Dot Comma (2001) and Bru Ha Ha! (2002) – Woloshen showed that he had honed his basic tools to a fine point. These films express the joy of music, movement, color and shape, in the tradition of direct animation pioneered by Len Lye, Norman McLaren and Harry Smith.
Soon Woloshen began to explore new paths as well. Too restless and experimental a spirit to be satisfied solely with the creation of these delightful abstract entertainments, he began to develop hybrid forms combining his advanced direct animation techniques with other forms of filmmaking. Moving and mysterious films such as The Babble On Palms (2001) and Two Eastern Hair Lines (2004) marry animated graphics with traditional cinematographic images, while a recent “archaeological” series that includes Chronicle Re-Constructions (2008) explores the organic decay of film emulsion. The Cave (2001), a one-off experiment, attests to a conceptual interest in film as an object: unlike most films, The Cave exists only as a single hand-made original, subject to gradual deterioration through repeated projection. Phont Cycle (2006) returns to the use of arbitrary linguistic signs from early films such as Son of Dada (1982). Here, the Tibetan letter “AH” appears from a central point, the lines flowing down and outwards like lava flows, then retracting upwards to leave the screen black. This gesture, like breathing, is repeated over and over, but the colors and textures of the letter change with each iteration, so that the film’s insistent repetition is also inflected by differentiation.
As Steven Woloshen’s work has become more diverse, it has become clear that he is an artist concerned not only with abstraction and animation, but also with essential questions about different forms of representation and signification. To watch Woloshen’s films is, first, to experience the pleasure of filmmaking engaged in a virtuoso play with its most basic elements. But the range of his work, and the divergent paths along which it has moved, show an inquisitive mind, curious to see how fundamentally different modes of graphic expression can be brought into play, into meaningful tension, in a single work of art.
– Chris Gehman

Montreal born artist, Steven Woloshen (BFA, MFA Studio Arts) has been passionately creating short abstract films and time-based-art installation pieces since 1977. He has been invited to show his work, has lectured on the subject of handmade analogue film techniques and has been commissioned to create unique films for artist - run centers, international film festivals and galleries. In 2010, he published his first book on the subject of decay, archiving and handmade filmmaking techniques, titled “Recipes for Reconstruction: The Cookbook for the Frugal Filmmaker.”

Canada Council for the Arts - research and creation grant

Main Film Commission  - A Step By Step Guide To...

Jutra Nomination for best Animation: The Curse of the Voodoo Child

The Indiegogo financing campaign for my second book has officially begun. Here is the contribution link: http://igg.me/at/scp

thank you my friends.
Steven Woloshen

RECIPES FOR RECONSTRUCTION: THE COOKBOOK FOR THE FRUGAL FILMMAKER NOW AVAILABLE

Veteran animator and filmmaker, Steven Woloshen is pleased to announce the publication of the second edition of “Recipes for Reconstruction: The Cookbook for the Frugal Filmmaker.” This book introduces a variety of simple artistic strategies…