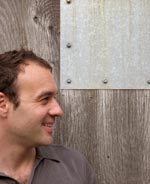 Thierry Gauthier has not received any gifts yet

Give Thierry Gauthier a Gift

Thierry Gauthier has completed a diploma in computer assisted sound design, a (BMus) in Electro acoustic music composition at University of Montreal - 2007 and he is completing a (MMus) in Electro acoustic music and video composition with Jean Piche at University of Montreal - 2008. He received an honorary mention (2nd prize) at the international electroacoustic music competition Musica Nova (Czech Republic, 2006), finalist at the 5e Electro-Acoustics Miniatures International Contest (Spain, 2008) and finalist at the competition JTTP (Canada, 2005, 2007 and 2008). The eclectic composer distinguishes himself by his originality, his versatility and by his experimental techniques and approach to composition. He received numerous commissions for movies, art-videos, television series, documentaries, multimedia, installations and multidisciplinary performances. He performed in more than 250 concerts across the world and his compositions can be found recorded on more than twenty albums.

Maxi said…
i like "Sans Titre", i can`t stop listening.
Thanks for creating...
bye