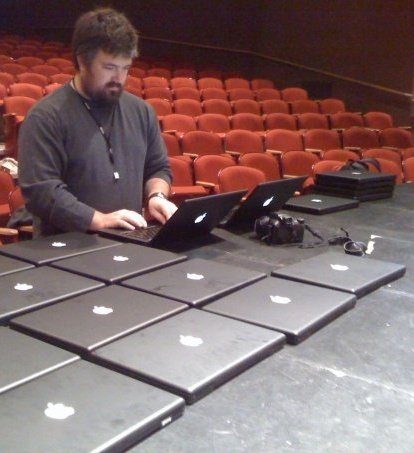 Robert Hamilton has not received any gifts yet

Composer and researcher Robert Hamilton is actively engaged in the composition of contemporary electroacoustic musics as well as the development of interactive musical systems for performance and composition. Mr. Hamilton holds degrees from Stanford University, Dartmouth College, and the Peabody Institute of The Johns Hopkins University with additional studies at Le Centre de Création Musicale de Iannis Xenakis (CCMIX) and L'Ecole Normale de Musique de Paris with the EAMA. He has been the recipient of the Johns Hopkins Technology Fellowship and a First Prize Winner of the Peabody Prix d'Ete competition.

Recent works include ECHO::Canyon, for UDKOSC performer, Tele-Harmonium for piano and interactive UDKOSC performer, Dichotomous Harmonies for 1,000 iPhone Leaf Trombones, Dei Due Mondi for 8 Sirikata performers, Triages for six instruments and computer and i have four pictures of you sleeping for violin +- electronics.